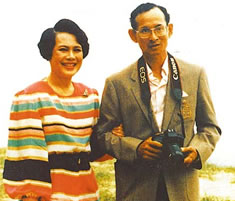 In an era of declining popularity of royalty in many countries, there's no doubt that Thailand's King Bhumibol Adulyadej  - the longest reigning monarch in the world - and his wife Queen Sirikit stand out as extraordinary exceptions. Held in overwhelming affection by the vast majority of Thai citizens, they are viewed as symbols of national identity every bit as much as the flag or national anthem and pictures of the King and Queen adorn almost every home and office building. Their birthdays, also celebrated as Fathers Day and Mothers Day, are national holidays and are marked with large celebrations. At these times, huge portraits and photos of them spring up all over Thailand in front of large buildings and at traffic intersections, and newspapers and websites are full of messages of congratulations. Although the monarchy is officially above politics and leaves running the country to the politicians, no politician could dare to contradict the words of the King.

Venerated partly through tradition and the law (see below), but mainly for the way they are perceived to have dedicated themselves to improving the lives of the Thai people, it can be hard for foreigners to comprehend the relationship between the monarchy and the common people. They've travelled extensively to the remotest and most deprived parts of Thailand to find out and listen to the concerns of the rural poor and then endeavour to provide practical solutions. Despite having royal photographers, the King often takes photos himself to document what he finds and is frequently seen in royal photos with a camera around his neck. The results are impressive - the King personally holds patents on a artificial rain making techniques for instance, and there's a long list list of royal initiated projects to improve agriculture and faming conditions, education and health. The King is in his eighties however, and so in recent years these activities have had to be scaled down somewhat.

When in Thailand, you should treat the monarchy with the same respect afforded to them as the Thais do. This is enshrined in law in fact, as the crime of lese-majeste - "the crime of violating majesty, an offense against the dignity of a reigning sovereign" - carries a minimum sentence of 3 years imprisonment and a maximum of 15 years, and Thailand is one of few countries where offences against this law are still prosecuted.

While few visitors would likely go out of their way to cause offence, the implications of this and the Thai reverence towards the monarchy are more subtle than it may initially seem. For instance, the royal anthem is played before the movie starts in cinemas and movie theatres and everyone, including foreigners, is required to stand up for the duration of it.

The reverence is to such an extent that if you drop a coin or banknote (which have the King's image on them) on the floor you shouldn't trap them with your feet - an action viewed as stamping on the King's head. Similarly, you can't, for example, roll up a newspaper with a picture of the King on the front to use to squish a mosquito. Any such actions will undoubtedly cause offence to Thais who witness them, and you will likely be reminded (hopefully politely!) of the inappropriateness of such actions. Rumours abound of tourists who, after getting in a heated argument with a street vendor over something or other, tear up a bank note in anger and storm off, only to be assaulted moments later by enraged locals who witness the incident. In general, there's no need to worry unduly about causing offence under this law, as any genuine mistakes are quickly forgiven and forgotten if you apologise.

It's not just unsuspecting tourists who can caught out by this law either. The Hollywood movie 'Anna and the King' had to be shot in Malaysia and is still banned in Thailand for it's unsympathetic (and by all accounts, inaccurate) portrayal of Thailand's King Mongkut. Far Eastern Economic Review and Economist journals have also fallen foul of lese-majeste laws, leading to temporary publication bans and some of their journalists having visas revoked.

Thai speakers say this word at least a hundred times a day, but its meaning is hard to pin down
Bangkok

Look past the heat, crowds and traffic jams, and you'll find there's a lot to love about Bangkok
Bangkok Accommodation

How to find somewhere to stay in Bangkok

Is it worth going on a tour, or can you do it all independently?
Thai Language

Making sense of 'Tinglish', the Thai version of English

Many Thais speak English, but often it's not quite the same English you know
Shopping Safety Attractions Indonesia

culture Safety Getting Around Indonesia

What are some useful Thai language phrases to know for a trip to Thailand?

You don't need to be fluent, but a little effort goes a long way