A lot of first time visitors aren't quite sure what to expect when first arriving in the capital of exotic Thailand, and some may be disappointed by their first impressions on the way into town - endless high rise buildings, busy expressway flyovers and billboards of western companies advertising in English. Yet while Bangkok has undoubtedly embraced westernization and modernization, you only need to look a little under the surface to see that it remains undeniably a Thai place at heart.

In between the skyscrapers and sophisticated shopping centers there's still the remarkable Wat Phra Kaew and the Grand Palace, the Temple of the Dawn and many more. Traditions live on too: don't be surprised, for example, to find a large dedicated spirit house built for good luck alongside almost every major building, or to see files of Buddhist monks making their early morning alms round - and it's surely one of the only major cities in the world where seeing an elephant paraded round the streets hardly even ranks as being unusual.

Amidst all of this lies one of Asia's most interesting and exciting cities, but it does have it's fair share of problems also - not least of which is the heat. Due to it's location in the tropics, Bangkok's average day time temperature is rarely much below 30 degrees centigrade at any time of year and the night time temperature is not much cooler. The maximum temperature can occasionally top 40 degrees during the hot season in April / May, when it is, not surprisingly, the low season for tourism. Despite the temperature, it is not all that sunny in Bangkok and most days are grey and overcast - meaning many visitors are surprised when they first walk outside Bangkok airport and discover that what appeared to be a cold, cloudy day is actually uncomfortably hot.

The heat, combined with the humidity and pollution, makes walking a sizable distance in Bangkok almost impossible, and breaking into a sweat after only a couple of hundred meters almost inevitable. The Thai people themselves will rarely walk any significant distance and there's a very large number of cars, buses,taxis and tuk-tuks to help them get about.

Sadly, these combine to make the traffic jams and pollution that Bangkok is justifiably world famous for. The seemingly permanent rot dtit (traffic jam) is a fact of life in Bangkok, and makes simple journeys that should take 20 minutes end up over an hour, even out of rush hour. The relatively small number of roads, the annual floods in September and October, and the hundreds of new cars flooding on to the roads every day don't help matters much either. However, Bangkok's impressive skytrain and new subway facilities combined now cover much of areas of the city a visitor is likely to go to and provide a convenient way to bypass them.

The combined effect of the traffic, heat, humidity, noise, dirt, pollution and the unappealing look of the city makes some want to leave Bangkok almost as soon as they've arrived. Though this is understandable to an extent, Bangkok has a lot to offer those who persevere.

The City of Angels

Despite all the problems, there's much to appreciate in Bangkok for those who persevere past negative first impressions and take the time to see it's attractions. Few of the Thais living in the city would want to forego the opportunities it offers and live elsewhere and for every foreigner who wants to leave as soon as possible, there's another who falls in love with it. The attractions are obvious: the impressive temples and tourist attractions, an endless number of decent restaurants, with food often at bargain prices (a ordinary meal and soft drink at a typical Thai restaurant may only you set you back around 40B (1 US$), and perhaps around 100 to 150B at a tourist orientated restaurant - though it is, of course, possible to pay much more). And wherever you are in the city, you will rarely have to walk more than 100m to find something to eat. 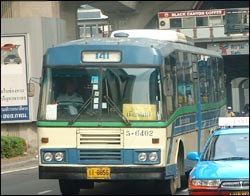 Getting about the city might be slow going due to all the traffic, but at least it's cheap and there's plenty of options. There is a comprehensive bus service that will take you all over the city in varying degrees of comfort, but the price is never more than about 25B (0.6 US$), and can be only 3.5 baht (0.1 US$) on the ordinary buses. Even when going from one side of central Bangkok to another, a taxi fare is rarely above 120B (3 US$), the only real exception being the journey to and from the airport. The skytrain was finished in December 1999, and for the areas it goes to, makes getting about quick and easy (although not particularly cheap compared to the taxis and buses). There are canal and river boats that effectively act as buses on the waterways, which are also very cheap and fast. The Khlong Saen Saep canal boats, in particular, are sadly underused by tourists as they provide a very quick and useful service, right across the city from Sukhumvit to Siam Square to Banglamphu for just a few baht. More transport schemes, including expansion of the the skytrain and subway lines, are underway too with notional completion dates in the next few years.

Shopping is also good value, with a huge variety of goods sold everywhere from street market stalls to upmarket in shopping centers. Shops are open every day, generally until around 9 or 10pm, which is convenient and makes it easy to get what you want, when you want it. 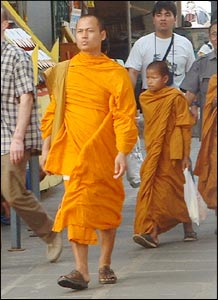 It's a great city for nightlife too, with an massive selection of pubs, bars and nightclubs, along with the famous adult-orientated entertainment. Bangkok also benefits from being, arguably, one of South East Asia's two most important cities (with Singapore). If there's an international cultural or social event going on in the region, chances are it's coming to Bangkok too.

And perhaps most importantly, there's the Thai people themselves who are surely some of the most friendly of any major capital city in the world. They seem remarkably tolerant of the challenges of life in the capital, and still manage to keep their fun loving and easy-going spirit. Try and emulate their jai yen (keeping your cool), a love of sanuk (having fun) and a feeling of mai pen rai (it doesn't matter, it's not important), and it will help you get the most from Bangkok. Those who take the time to see what it has to offer tend to be rewarded in Bangkok, while those who spend a couple of days there are likely to only get frustrated with the difficulties.

Finding your way around

Bangkok is split in two by the Chao Phraya river (the 'River of Kings', as it is sometimes translated). Almost all the tourists who come to Bangkok stay on the east side of the river, where the heart of the city is located. On the eastern side, between the river and the railway line is the where most of Bangkok's historic and impressive sights are, and if you have only 1 or 2 days in the capital, this the area to see. The Old City area, known as Ko Rattanakosin, has the best including the Grand Palace and Wat Phra Kaew, Wat Pho, and the National Museum.

A little south of Banglamphu is the densely populated, noisy and busy Chinatown, orientated round Charoen Krung, Yaowarat road and Sampeng Lane. This areas contains the main train station (Hualamphong), and has consistently bad traffic jams, even by Bangkok's standards. Little India is adjacent to Chinatown, in the area around Pahurat and Chakraphet roads. This is perhaps the best place in the city for tailors, clothes are cheap and the range is huge.

Southeast of Chinatown are Sathorn and Bangrak districts, which consists of the area around Silom, Surawong, Sathorn and Si Phraya roads. This is the major financial and commercial district of the city, and also the original tourist area. Located by the river are some of Bangkok's oldest and finest hotels, such as The Oriental, Shangri-La, and Royal Orchid Sheraton. As a business district there are no sights around here as such, and traffic congestion is almost constant. There are however many middle to high end hotels, restaurants, shopping arcades and the (in)famous Patpong nightlife area. North of Silom is the Siam Square area (known as Pathumwan). This contains Chulalongkorn University, considered Thailand's top university, the National stadium, the ultra-modern shopping area of Siam Square and the many nearby shopping malls. The area is orientated mainly around Ploenchit road, which runs west to become Rama I road, and east to become Sukhumvit road. Like Silom, it has few sights as such, but many top hotels, such as the Hilton International Bangkok and Regent Bangkok, are here. The busy and noisy Pratunam district lies north of Pathumwan.

The 6 - 8 lane Sukhumvit road runs southeast from Ploenchit road. Once considered as on the outskirts of Bangkok, this has developed into the leading area for moderate hotels, and much of the lower end is crammed full of tourist facilities, including restaurants, shopping centers, and the Nana Plaza adult entertainment center. There are no sights here otherwise, and it takes a long time to get to the sights of Ko Rattanakosin. The lower end of Sukhumvit road (between soi 1 and 21) is very touristy, but it becomes a lot less so further up. The higher numbered sois are a popular residential area for foreign expats. Further down still, around Sukhumvit soi 71, is the area known as Phrakhanong which is also a good place for shopping, though it is not much visited by foreigners. Din Daeng, Bangkapi and Lat Phrao districts all lie to the north east of Sukhumvit, and are primarily residential areas. South of Sukhumvit is the port district of Khlong Toey, one of Bangkok's poorest areas that is generally best avoided.

The very large Thonburi district encompasses all of the areas west of the Chao Phraya river from Ko Rattanakosin, Chinatown etc...It's size and history (as the capital before Bangkok) give it a status of more than just a district of Bangkok. Charan Sanitwong road is the main aretry in Thonburi, running most of the way from north to south. Phra Pin Klao district is across the river from Banglamphu and this is now a good area for cheap shopping, with many markets and malls and reasonable nightlife. Somewhat confusingly for the foreigner, Bangkok Noi and Bangkok Yai districts are also in Thonburi, not in Bangkok proper across the river.

Bangkok is decentralized to a much greater degree than western cities, and it makes identifying the city center a tricky task. Perhaps the most commonly accepted area is the Siam Square area, but it could also be thought of as the Silom road district or the Ratchaprasong area. No area is really dominant, and you can be confident that wherever you are there will be huge shopping malls, restaurants and the like nearby.

How to speak polite Thai, and use the words 'Krap' And 'Ka' correctly

They may be untranslatable, but they're indispensable to speaking Thai well
Thai Language

Thai speakers say this word at least a hundred times a day, but its meaning is hard to pin down
Bangkok Attractions

What you need to know before going shopping in Bangkok

There are still bargains to be had, if you know where to look and can bargain hard
Thailand Getting Around

Getting around is easy and cheap, but safety standards may not match what you're used to
Thai Language

What do I need to know about getting somewhere to stay in Indonesia?