After you've been to Wat Phra Kaew and the Grand Palace, these two temples round out the must-see sights in Bangkok.

Wat Pho is famous for the huge Reclining Buddha statue it houses. At 20 acres large, it is the largest Wat in Bangkok, and is technically the oldest too, as it was built around 200 years before Bangkok became Thailand's capital. However, today the Wat today bears virtually no resemblance to that originally constructed, as it was almost entirely rebuilt by Rama I when the capital was moved to Bangkok. It holds the dual honors of having both Thailand's largest reclining Buddha image and the most number of Buddha images in Thailand.

The highly impressive gold plated reclining Buddha is 46 meters long and 15 meters high, and is designed to illustrate the passing of the Buddha into nirvana. The feet and the eyes are engraved with mother-of-pearl decoration, and the feet also show the 108 auspicious characteristics of the true Buddha.

The large grounds of Wat Pho contain more than 1000 Buddha images in total, most from the ruins of the former capitals Ayuthaya and Sukhothai. 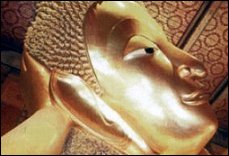 The grounds are split in two by Chetuphon road. The northern section is generally the only one most people go to, and it includes a large bot (temple hall), enclosed by 394 bronze Buddha images. Outside the bot, there are 152 marble slabs depicting the second half of the epic Ramakian story. Also near here are four chedis, constructed to honor the first three Chakri kings (two for King Rama III). There are also a massive 91 others Chedis of varying sizes arounds the grounds, along with chapels, rock gardens, an array of different types of statues, inscriptions, belltowers and resident fortune tellers. The library is nearby too, decorated impressively with figures and pagodas made of porcelain, in much the same way as Wat Arun across the river. The much less visited southern section has less of interest, but 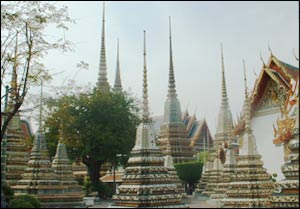 makes a good place to find a monk to chat to for a while. Most would welcome the chance to practice their English on visitors.

Massage - Wat Pho is also famous as Thailand's first university, and is center for traditional Thai masage - the rich, famous and powerful have all been known to come here. Inscribed on stone in the walls of Wat Pho are all that was known about Thai massage dating from the reign of King Rama III (most previous texts were lost when the Burmese destroyed Ayuthaya)

To get a traditional massage here costs 150B for 30 mins, 250B for an hour and herbal massages are available at 350B an hour. If you want to experience traditional Thai massage, this is probably the best place available and is highly recommended, though be aware that it's not exactly a gentle experience. A foot reflexology massage is also available at 250B for 45 minutes.

It is also possible to take courses to learn traditional Thai massage. Courses can be spread over either 10 or 15 days. The massage center is situated at the back of the Wat, the opposite side from the entrance. To get a massage, simply turn up here and wait in line until a masseur is available - perhaps 10 or 20 minutes in the quieter periods in the early morning and late afternoon. 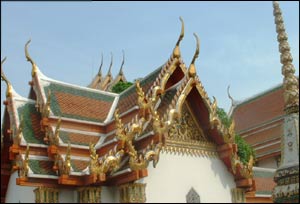 Wat Arun, the Temple of the Dawn

Take a quick boat ride across the river from Wat Pho and you'll arrive at the famous Wat Arun (วัดอรุณ). This is perhaps better known as the Temple of the Dawn, and is one of the best known landmarks and one of the most published images of Bangkok. It consists of a massive elongated prang (Khmer-style tower), and is surrounded by four smaller prangs. The prang is described by the Tourism Authority of Thailand as 104m high, while most other sources quote figures around 80-85m. It is decorated by bits of porcelain which had previously been used as ballast by boats coming to Bangkok from China, a hallmark of the reign of King Rama III. The Wat had a brief period as host of the celebrated Emerald Buddha, which now resides in nearby Wat Phra Kaew. 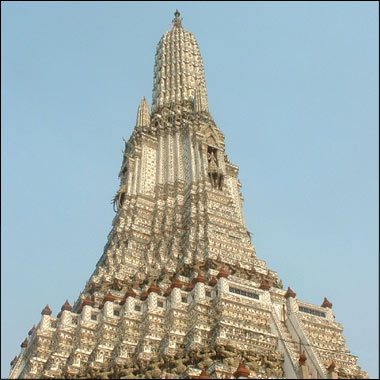 The Wat really looks better from a distance than close up, and you're not missing out too much even if you only view from across the river. The grounds are fairly pleasant and peaceful though, with good murals and a main Buddha image supposedly designed by King Rama II. The mythical guardians here are also quite impressive, though very similiar to those at Wat Phra Kaew.

It is possible to walk a limited way up the (very steep) stairs of the main prang, which gives a reasonable view of the Chao Phraya river.

Despite its name (coming from Aruna, the Indian god of the dawn), the best views and photos of Wat Arun are in the evening with the sun setting behind it. There are some restaurants on the opposite side of the river that are good for watching this, though you'd be lucky to see the image of Wat Arun that's on all the postcards - that of the red sky sunset with the sun setting directly behind the temple. Sunset is around 6pm - 7pm all year round in Bangkok.

The 17 words you need to know to count in Thai

Pronounciation is hard, but putting together simple sentences in Thai is easier than European languages
Bangkok Safety

Don't be the next victim of the Bangkok gem scam

It's remarkably sophisticated and well-organised, so make sure you're aware of it
Thai Language

Liven up your Thai speech using these colorful proverbs

Surprisingly, they share a lot of similar ideas with Western proverbs
Thailand culture

What do I need to know about getting somewhere to stay in Indonesia?