Perhaps the easiest and most comfortable way to get around, if not always the quickest, is by the aircon taxi. These come in quite a few different colours though the green-yellow and red-blue ones are the most common. Bangkok has thousands of taxis, and finding one at any time is never a problem. The occasional exception to this is during a monsoon season downpour. By international standards they're very cheap too, the flagfall rate is 35B (0.85 US$ approx) including the first 2km and it's 5B/km after that. This means that even relatively long journeys, such as from Sukhumvit to the Grand Palace often aren't above 100B (2.5 US$). A surcharge is applied in traffic jams (1.25B/m when moving under 6km/h), meaning at night when there's not much traffic they're definitely the best way of getting around.

There's no exams that have to be passed to become a taxi driver in Bangkok, and so many have a less than encyclopedic knowledge of the city. Communication can be a problem with the majority of Bangkok's taxi drivers too. It's worth bearing in mind that many taxi (and tuk tuk) drivers are from Thailand's poor Isaan (northeast) region, are likely to be fairly uneducated and many speak little English. Even the ones that can will probably not be able to read a map that's written only in English. Although there are a large number Thai words that have been taken straight from English, they often come out with a distinctly Thai pronunciation that can be markedly different from the original (see the 'Thai-English' page. 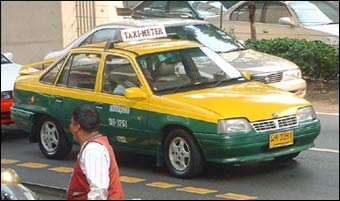 The two tone green and yellow taxis are generally reckoned to be the best ones. These are driven by the owner, while all others are rented out by the day. Of course, everything really depends on the driver rather than the color of the car, and there's not really any major difference between any of them. All licensed taxis have yellow and black number plates. Tipping of taxi drivers is not really a Thai practice, though rounding the fare up to the nearest 5B or 10B is fairly common. Any more is not expected and not really necessary. If you're unlucky, the driver will sometimes claim to have no change to try and force you to leave a 30% tip or thereabouts - getting out to change money at a nearby store will often lead to him remembering where his change is kept.

Taxis in Bangkok are generally pretty good and problems are not that common, especially in comparison to tuk-tuks. Virtually all taxis in Bangkok are metered nowadays, though on occasion the drivers will (illegally) refuse to use it and quote an inflated flat fare instead (sometimes claiming the meter is 'broken'). Simply start to get out though, and they will normally agree to use it. If not, there's plenty of others who will. The exception is the rainy season downpours, when an inflated price is the norm, for Thais as well as farang. You may also come across the odd taxi driver with a rigged meter, though this is pretty rare - if you realize, pay only what the price should be and call over any passing police if there are any. 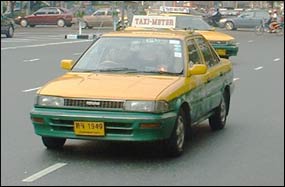 There are a couple of ways to increase the likelihood of a driver using the meter. Some taxi drivers will target tourists, especially first time tourists, who they believe (often correctly) will pay the inflated rate. It follows that it's best to ignore the drivers who simply wait on Khao San road, by the Grand Palace, outside the big hotels etc as it can be quite difficult to get a meter fare from them. The ones who linger outside of the expensive hotels all day are the worst of the lot - they are simply lazy, and would prefer to overcharge a few tourists a day than get some honest fares. Don't use them just because of their apparent convenience and/or persistence (e.g. grabbing your bags from you as you leave the hotel), as hailing from the street is easy and a much better choice.

Appearing like you know what you are doing is also a good way of avoiding any problems. It's can be worth lying if they ask you how long you've spent in Thailand already, or how many times you've been. If you say this is your 3rd trip to Thailand, and you've been here for a month so far, they presume you know how it all works. Also make sure to open the door first and tell the driver where you want to go before getting in, as it obviously makes it much easier to walk away if they quote a flat price.

The best way to avoid any problems is to speak some Thai. This may seem difficult, but the level required for taking a taxi is quite simple. 'Meter' is a Thai word taken from English and is pronounced the same, but with more emphasis on the 'er'. If you get stuck, many hotels will give out cards with their name and address written in Thai on it.

The prices listed below are an approximately the prices you can expect to pay for a metered taxi journey or negotiated tuk-tuk fare. Obviously they can vary considerably due to the traffic, the route of the driver etc...Nevertheless, a reasonable fare will never be more than 50% of these - though that's not to say the initial price you're quoted won't be more than that. Prices are cheaper in the night when the traffic is very light.


To the Grand Palace/Wat Phra Kaew from...

To Dusit Zoo from...

Can I Work While Travelling in Southeast Asia?

Is funding a trip this way just a pipe dream or a realistic prospect?
Thai Language

The 17 words you need to know to count in Thai

Be careful not change your tone on the last word of a sentence as in English!
Visas Indonesia

culture Safety Getting Around Indonesia